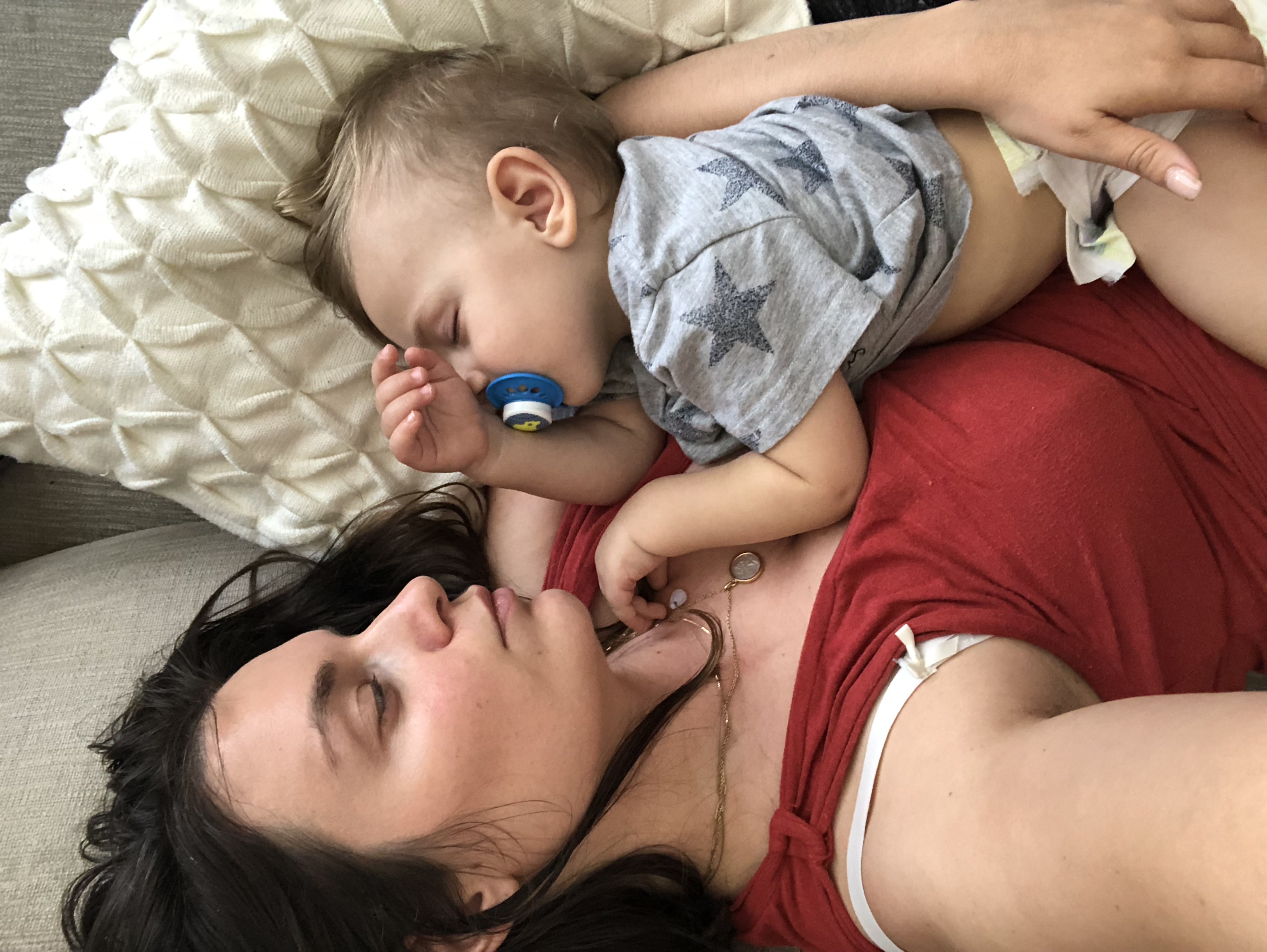 MANAGING SLEEP AND SCHEDULES WITH MY BABY

The main questions I always get are:

“How are you sleeping?”

“Is he sleeping through the night?”

Well, these are very tricky questions as it really varies. Although, I’ve found that a couple of things have helped me along the way and that could help you.

The first few weeks were very hard, Oliver would wake up almost every two hours to feed and would sometimes feed for over an hour. Since he had a low birth weight, I had to wake him up to feed him every three hours. The “what the hell” part was that I had to “schedule” his next feeding from the moment he started eating and not when he finished. By the time I was changing him & some, I had little time to rest.

Here are some questions I get often from my mommy community on Instagram:

DO YOU ALWAYS HAVE TO WAKE THEM UP?

That depends on their birth weight and what your pediatrician recommends. In France, they don’t usually wake babies up whereas in America it’s a very common thing. If Oliver was born as a 9lbs baby…no I would’ve not woken him up as long as I knew for a fact that he got his full feedings during the day. Although some babies who sleep a little further from the mom, especially if you’re breastfeeding, can be deep sleepers and at the beginning are not be able to get the energy to wake up even though they’re hungry. You will get to know your baby’s needs.

Even though I checked all the possible discomfort or needs, he still wouldn’t sleep for more than 15 minutes at a time unless I held him. Maybe I wasn’t swaddling him correctly? I’m not sure but the one thing I’ve learned is that I tried everything that I was recommended to do and ended up having to tweak a few things here and there. It’s incredible how similar babies are and yet so different! As a new mom, it was very stressful for me to grasp the idea that some things work for my baby and some don’t.

A week into it, I was such a zombie, I had never felt sleep deprivation that intense in my life. I remember one night feeding him on the rocking chair and all of a sudden just feeling my head fall forward.I had completely fallen asleep and it freaked me out just the thought that I could’ve dropped him. So, enough was enough, obviously something was not working. I unswaddled him and laid him next to me. That was my first “successful” night where I was able to sleep in a three-hour increment. Oliver wanted to stay near us and in a way that seemed to be the most natural thing to do. 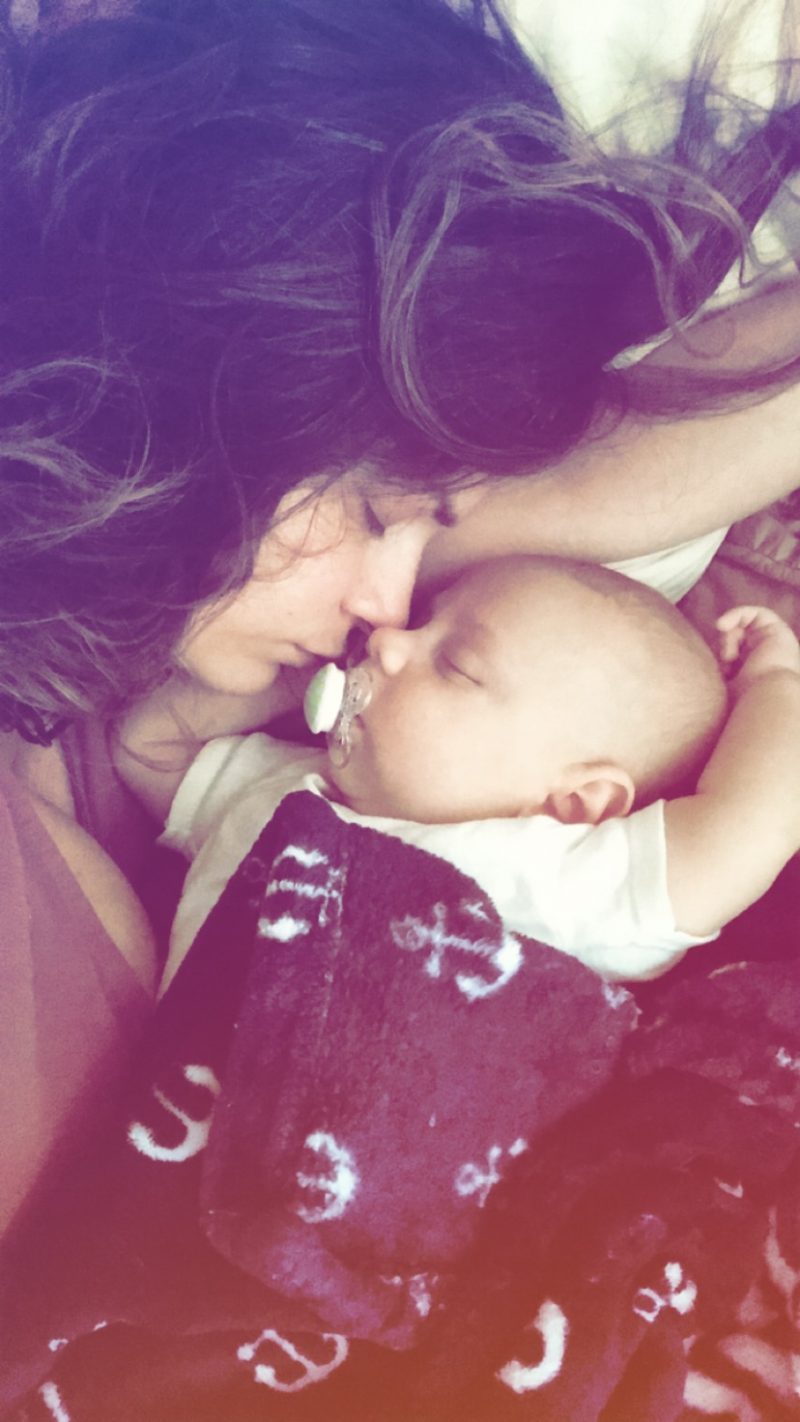 WHY DO YOU HAVE TO SWADDLE A BABY?

You swaddle a baby so they can be tight and comfy just like in your tummy because that’s all they know. Also, they don’t know how to deal with their little arms and they get startled in their sleep and it can wake them up. Not all babies like to be swaddled and some babies like to have their arms out. I just learned to observe Oliver and understand that babies are all different!

WHAT POSITIONS ARE THE BEST TO BREASTFEED AND GET SOME SLEEP?

The best position to get some snooze is obviously laying down on your side. Some mommies can’t because of their breast size and some babies don’t like it. Oliver loved it…a little too much. My mistake was introducing him too early to that position because now he refuses to breastfeed in any other positions. It’s been a real treat when you want to do anything outside the house or while travelling (eye roll). I’ve managed though and found alternatives. Not the ones I wanted but as a new mom, I’ve had to learn to be flexible knowing my baby will always be ok even though I had my mind set on what I wanted for him. I shouldn’t be ashamed or feel like a failure when certain things didn’t work out the way they “should have.”

Motherhood Is Hard to Get Wrong. So Why Do So Many Moms Feel So Bad About Themselves? This is a very powerful article on Time Magazine about the pressure of being a mother in a society where everyone has an opinion or a piece of advice to give.

My own blog The Mommy Codes is merely my personal experience, with the knowledge and understanding that we’re all different.

WHAT IS WHITE NOISE?

White noise is a sound that mimics your tummy. It sounds like a constant “shhhh.” Some can also mimic your heartbeat. There are cute stuffed animals or even playlists that can play white noise.

AREN’T YOU SCARED TO ROLL OVER HIM WHILE YOU SLEEP?

I don’t move when I sleep, I guess I’m lucky. You can get the Dockatot if you want to co-sleep with your mind at ease.

Eventually, co-sleeping worked for me and Oliver. I certainly didn’t plan it and it definitely took an adjustment, but I love it! I remember when he was really little, he’d make all these noises and I had read that newborns are loud! He would move his little head side to side and I was horrified and thought “Omg! He’s waking up, don’t move Julie! Don’t even breathe” haha when actually he was just self-soothing himself to sleep!

At about two months, I started implementing a night routine, every night I’d give him a bath at 6 pm and bed by 7 pm. Babies love routines, they crave them. The bath had become a symbolization of “this is nighttime, time to go sleep.” It also helped me a lot in having him differentiate day/night.

Because I’m not into the crying out method, I would feed him and then rub his nose and his back till he fell asleep. I’d position him in his favorite position which is on lying on his side and I go with his flow, letting him soothe himself but also letting him know that I’m right here, that he’s ok. At first, we battled a bit but now till this day, I don’t rock him at night unless he’s really upset. I have the patience for doing that and I enjoy these moments with him. 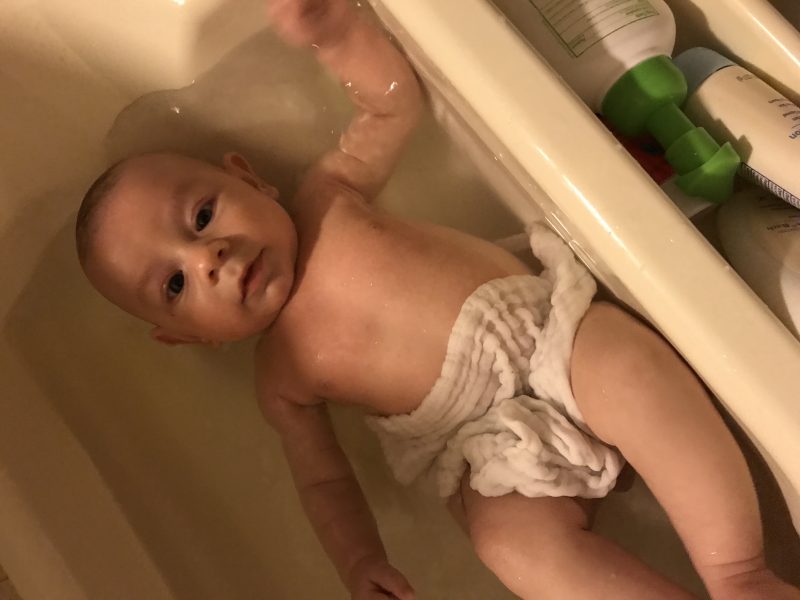 That whole scenario saved me a lot of energy, and it gave Kyle and I some personal time to look forward to after 7 pm came around. Although I’m not going to lie, the first few months, all I could obsess about was sleep so I went to bed by 8 pm. Oliver usually had a 4-hour sleep window from the moment he fell asleep and these straight hours of sleep were delicious. I also would sleep when he slept during his naps. I also haven’t been able to drink caffeine as I’m breastfeeding and Oliver is super sensitive to it, that’s been very tough to say the least but I’m amazed at how my body eventually created natural energy and mommying eventually got easier!

I remember rushing Kyle to the book store a few days later coming home with Oliver and just feeling clueless! My two favs were: “The Happy Sleeper” and “The Womanly Art of Breastfeeding”

Once he got a little older, I started having a morning routine. I think the hardest part is to get your baby to sleep through the night and not wake up at the crack of dawn…it’s challenging and momma, you’re not alone!!!!

Now if he wakes up before 7:30, I let him do his thing as long as he’s not crying…He usually just plays around, kicks me here and there but I manage to rest my eyes for a little longer. (He doesn’t crawl yet so I’ll let you know how I handle that one when we get there and by then, I’m hoping he’ll sleep in his own crib! yikes!)

Oliver started naturally waking up by 7:30 because he realized we’re not moving any time before! I remember when he was younger, he would wake up at 4:00 am and I was just like “nope buddy we’re not starting the day now! No way!” and I’d try everything to put him to sleep…back rub, nose rub, shhhhh, rocking…you name it! It was most of the time successful!

One thing I’ve learned is that I always believe and trust that he’ll fall back asleep. If I go in the situation with negative thoughts and all myself “He’ll never sleep.” it’s not going to happen, not healthy and more stressful.

Another thing is that at the beginning, they’re all over the place and you just have to accept that. I realized that I’d find myself trying to rock him to sleep because I was the one dying to sleep! wishful thinking! You’re better off going with your baby’s flow until he understands the world a little better! Patience!

Now Oliver is bang on with a schedule. Of course, it changes from time to time because these little creatures are unpredictable but I can have a pretty good idea of what to expect for us throughout the day.

HOW DID YOU SET A SCHEDULE FOR YOUR BABY?

I think I’ve set a schedule with him instinctively, naturally observing my baby to meet his needs. Little by little I started seeing a pattern and sometimes I’d ease him into preparing him for a nap because of what seemed to be his previous behavior on other days. I’m very careful to not leave him with negative feelings or anxiety about certain things. I don’t let him cry to sleep and I’m consistent on how I do things so he knows what to expect. I think that’s why he’s fairly been an easy, gentle baby.

Let me know if you have any questions. I hope this helps!!!!!!

My Must Haves When My Toddler is Sick

TRAVELING TO ASPEN WITH A BABY

GENTLE PARENTING: HOW I AM SLEEP TRAINING MY BABY

Check out my recent podcast with the Fertile Life!