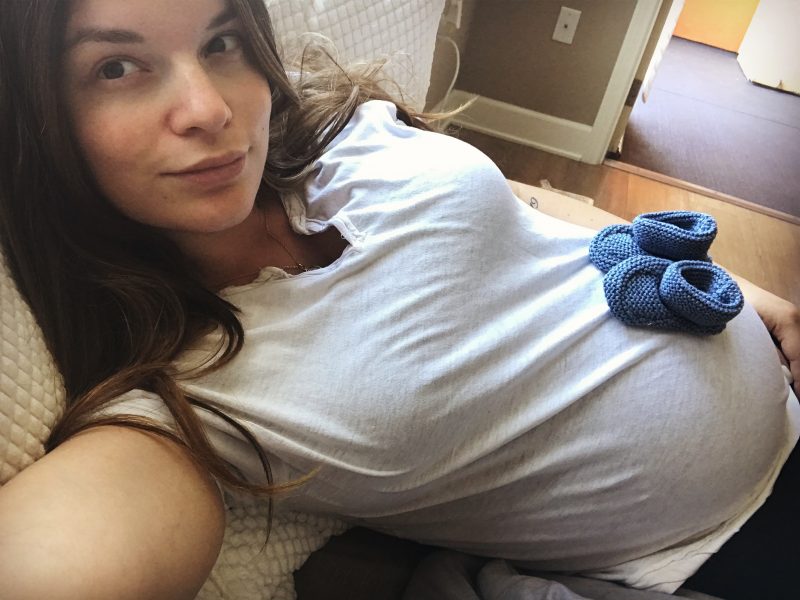 my due date was 07/19, and he was estimated rather early than late! He had dropped considerably two weeks before and we were waiting impatiently…I started feeling cramps on and off throughout my third trimester, every time we went to the doctor, we would scrutinize his face hoping that perhaps he’ll magically say, “tonight is the night!” but instead we kept getting “it could be tonight like it could be in three weeks…” so, there you had it, for three weeks at least, every little cramps or what seemed to be a contraction, I had this ah ha moment and Kyle would just look at me and pretty much not expect anything to happen as he had gotten excited more than once from my what-seemed-to-be an indication that baby was coming…and apparently Marylin Monroe had more chance walking through our door than that baby coming out…*sigh*

six days before my due date, on our doctor visit, he told me that even though my little meatloaf had dropped even more, that my cervix was showing no signs of labor…he proposed that if nothing was moving I should get induced a day before my due date (which I thought was a little odd but that was what his schedule was offering) or at the latest, 6 days after my due date as he didn’t want to risk the baby’s health.
That same day I got home and was really annoyed, the thought of getting induced wasn’t the best option…I was terrified of it and I really wanted to be able to give my body a chance. I wanted to have a story to tell my son, I wanted to know when and how he was going to decide to be apart of this crazy world and most importantly I didn’t want to risk stressing the baby and ending up with a C-section.

the funny and wild thing about all this, is Kyle had a very important business trip, he was not going to miss the birth under any circumstances but the trip was scheduled a week after my due date and with Meatloaf not wanting to come out…I had a lot of thinking to do. That’s when I called my doula, Lacey, who is amazing, fun, supportive and really understanding! I told her what the doctor was suggesting and she said that I could do a few things to lose up my cervix and hopefully go into labor before the scheduled induction …long story short, I had spicy food, walked for miles, relaxed and opened my hips on the yoga ball, used primrose oil and drank a lot of raspberry tea. Like she said “you can do all those things but if baby is not ready, he’s just not ready but it will ease up labor.” 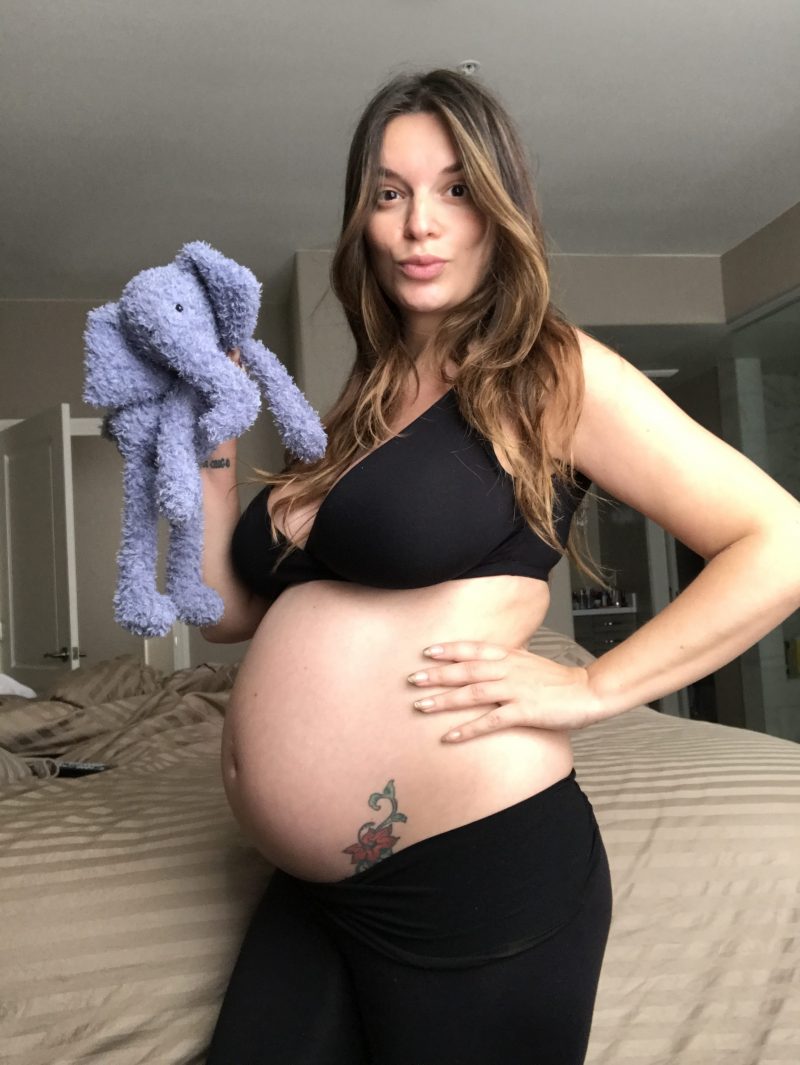 On the third day, I had finally obsessively finished his little nursery, I was so proud, I snapped a picture and posted it on Instagram. I went to get my nails done and had a lunch with a girlfriend, and boy was I on fire! I felt like I had drank 10 cups of coffee!
Around 7pm, I deliciously made a little bubble bath with candles, soaking in the warm water and chatting with kyle sitting on the floor, we were really starting to consider to getting induced on the 18th, two days before my due date and two days from that day! I was tired, and I was just– well over it. It’s hard to explain now, but my pregnancy hadn’t been easy…I started tearing up at not knowing what to do …when all of a sudden I felt a little something…it was different from a cramp and had a beginning and an end. OMG, a contraction! Kyle looked at me with that look, you know, oh-here-we-go-again…(one thing about me is I tend to be a little dramatic, haha…so I can lose believability.)

Three hours went by, it was about 10pm and I texted my doula, Lacey, letting her know that it seemed like I was having mellow contractions every 20 minutes. Nothing I couldn’t handle. I was super nonchalant about it, no biggie! she said to keep track of them, I probably had a long way to go, to go to bed and if it was labor, I shouldn’t worry because it will definitely wake me up….Alrighty then!
I passed out and woke up around 2am, in more pain than I was, they were now 15 minutes apart and I was way more uncomfortable but I texted Lacey again, playing it cool as I just believed it was a false alert and the contractions would drop. I went to the restroom and went back to bed. A few minutes later, I tossed and turn to get comfortable when I felt a little water…”uh oh! it’s my water!…no Julie…no, don’t be that girl again, you just peed a little …” Meanwhile, Kyle is sleeping and I figured I’d only wake him up if something major is happening. I fell back asleep.

4:30am comes and aaaaahhh, that did not feel good!!!! a contraction woke me up and I waited till the second one, they were now 8 minutes apart. I texted Lacey again and she said to breathe and try to relax, she would only come if they are 5 to 6 minutes apart.
I went downstairs and thought to myself, good Lord, this hurts! I was messaging with a girlfriend back in France who luckily was going about her day thanks to the time difference, she was reassuring me as I was just crying profusely on the yoga ball. All of a sudden, in about 20 minutes the contractions went from 8 minutes apart to 4 minutes apart and again, I was just thinking that I had to be paranoid that they were so close together…how was that even possible I kept asking myself!I probably wasn’t counting them right…I texted Lacey again, finally being a little more assertive on the fact that I’m in fucking pain! that’s when she texted back “wait! can you talk during the contractions???” and I replied….NO…that I couldn’t even stand up and that’s when she decided to rush to me. 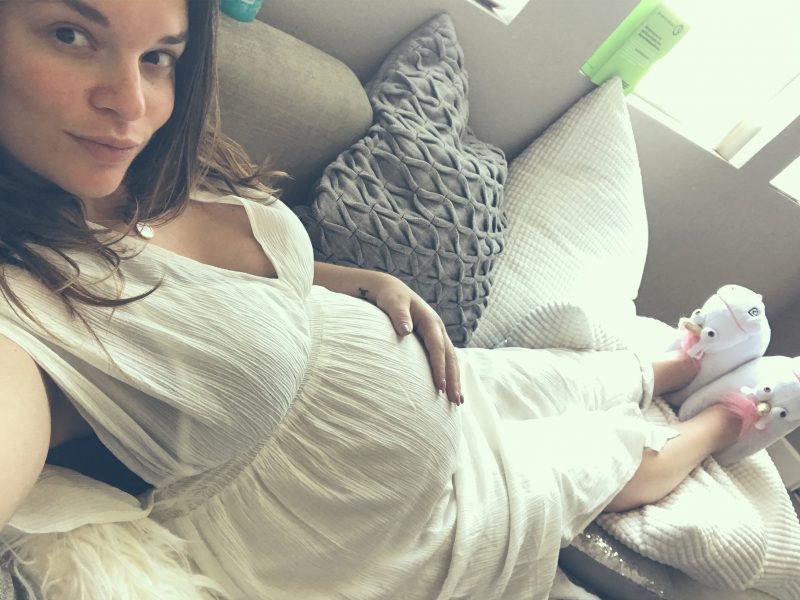 I remember waking Kyle up, very gently and just saying “baby, it’s time…” and I walked away as I was having another contraction and I didn’t want to freak him out. He came downstairs thinking that we probably had a long way to go, when all of a sudden I was screaming on the couch and he started helping me breathe holding my hands. That’s when Lacey walked in on me throwing up in the trash, shaking…”hmmm…that looks like active labor! we gotta go!” and at that moment did I realize…it’s happening! he’s coming! I was ready but terrified and excited and just My oh MY! This is it……and we said wouldn’t It be funny if he’s born on 7-17-17! Especially that Kyle has a history with the number 7 and has it even tattooed on him! The craziest part is his due date was the 19th which I have it tattooed on me as my mom was born on the 19th and passed away on the 19th. Everything was connected in a crazy way and we just couldn’t wait for him…..

When we arrived at the hospital, I just remember them asking me to sign their damn paperwork and I was screaming in the lobby, now that I thing about it, I laugh! what a shitshow! they finally got me in and I thought I could do it and just be strong but “where is that damn epidural pleassseeee!” finally after they did the procedure which was very emotional and tough because they ask you to not move at all during a contraction which it’s very challenging. I just remember Kyle holding my face close to his and just giving me all the strength in the world. I felt so much better once I got the epidural, I was shaking because of the hormones but I was just feeling some kind of pressure. I was finally able to relax. At that point it was probably 8am. I was sipping on some water and ice cubs just breathing through it all. By 10 am they realized that my contractions had gotten further apart and suggested pitocin which accelerates contractions. I was against it but listened to them. An hour later they said that Oliver didn’t like it and his heart was not agreeing with it. So they kept moving me side to side, up and down and decided to just let my body do what it needs to do which they said could take hours. I trusted my body and was very happy with that decision.

by 12am I started feeling a lot more pressure and they saw that my contractions were really strong and Oliver’s heart didn’t like them either so here we go moving me around. I was starting to get a little nervous but they were very reassuring.

About two hours later they decided they’d check how dilated I was since my contractions were really strong, they figured I’d hopefully be at a 6-7 inches. The nurse looks at me and says “OMG, you’re a 10! let’s have a baby” my heart stopped, my head spinned, I started crying and…..what? Now? right now? I didn’t feel ready at all. I couldn’t believe hearing her words: “Let’s have a baby.” and Kyle had just gone the cafeteria! My doula called Kyle to announce the news, meanwhile so many doctors walked in the room, turning the lights on, prepping me and I was terrified. TERRIFIED. I felt so small and yet so powerful. I had waited for this very moment, I had to be strong, I had to start pushing.

Kyle came back and that’s when they said that I should start pushing. I just pictured what they do in movies and just pushed. Holding your breath for 10 seconds and starting over three times is hard. I just kept going. I remember them asking me if I wanted to touch his head and I was completely taken back “no, thanks” they said “ok just a few more pushes! He’s almost here” I thought to myself, “ins’t that what you always say?” All of a sudden, miraculously and disturbingly, I see Oliver’s head in the reflection of the doctor’s goggles and “holly Molly he’s right there!!!” And that’s when I gave everything I had in me. Now I understand why a mirror is incredibly helpful while you’re pushing. hehe.

few minutes later he was on my chest. 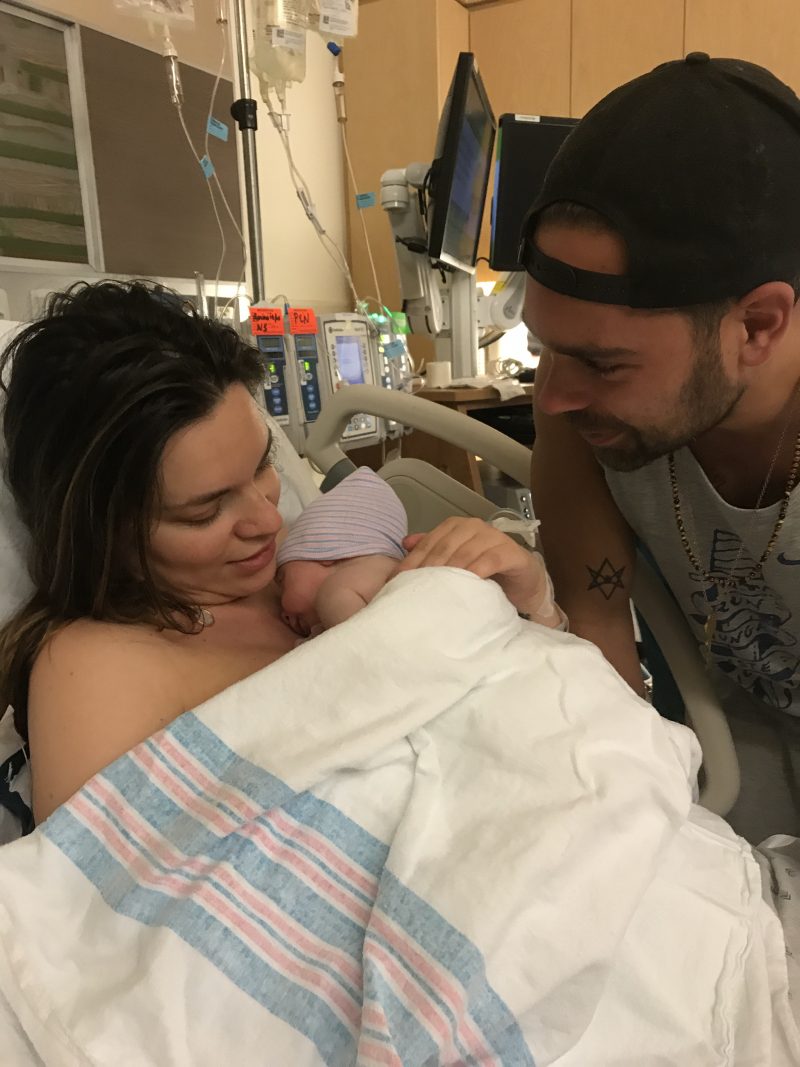 to contact my doula if you are looking for one! she also does sleep training, Click here

Here a few items that are essential for your diaper bag! I loved having my robe there to feel comfortable and like myself. Also to take cute pictures with your brand new babe. Little tip: Ask your nurse if they can give you gaze for the baby, pads and these fishnet panties. They come in handy and gauze is a little pricy. (it’s better to use that with warm water for a certain amount of time to clean your baby’s bum because of their very sensitive skin)