I remember the day I found out I was pregnant, one of the first things that crossed my mind was “oh my god! I’m going to have to give birth.”

Giving birth was honestly quite terrifying to think about but I always knew I wanted to become a mom…So I kinda had to deal with it! I remember on my way to buy my second pregnancy test, because I HAD to be sure this wasn’t just a AH HA Moment, I said “Julie, put these thoughts in a box and come back to it later.” I’m huge on compartmentalizing…which has it’s benefits…sometimes! It was just too much to think about…within my pregnancy, I naturally found the right time to start digging into it.

Giving birth was like this mysterious thing women do; Actually millions of women have done it for years and years and yet I still felt like I was perhaps an exception. I kept hearing women say, ” you’ll know exactly what to do.” But how? I pictured childbirth as something enigmatic that my subconscious & body apparently knew about- but “I” was left in the dark. So when they talk about a relationship with trust, this is the ultimate trust that I had to cultivate for 9 months between my body & I.

This is the ultimate trust

that I had to cultivate

I just kept thinking that there was something growing inside of me and was somehow going to have to come out! I mean…it’s scary! Think about it! I was growing a freaking human!!!! Still to this day it absolutely boggles my mind that women, are capable of such miracle! Exactly C-A-P-A-B-L-E , so I was going to give birth like a champ and everything was going to be fine!!! I decided it was time to put on my big girl pants (Kyle says that I live in some kind of world with unicorns and rainbows…I mean, maybe…) I guess, I told my unicorns to sit down for a minute. Like a hot minute… 🙂 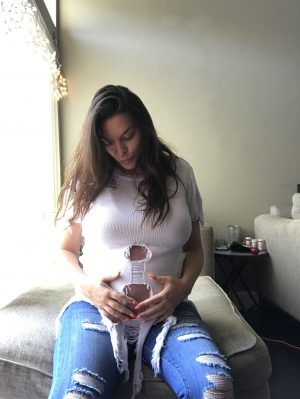 I have always had huge respect for women, always loved empowered women sharing their stories and being themselves and now I LOVED moms! they were superheroes! I wanted…No sorry, I needed to know their secrets for giving birth! I mean I was low key about it because otherwise I would’ve been a complete freak with all the questions I had…So here’s some of the best advice I received after questioning moms for hours:

You can’t go into a situation that your body as prepared all your life for without BELIEVING that you can do it! You have to TRUST your body like I was saying above. I realized that my body had its own intelligence. It knew exactly what to do, throughout the pregnancy to breastfeeding. I’ve actually never felt so not in control because my body was mechanically doing what needed to be done. I had no say. It was just happening. Let it be to it’s finest! it’s mind-blowing and that’s something to really hold onto while giving birth and surrender into knowing your body is guiding you. At some point I was dilating real slow and I just said, I trust my body. Kid you not, i went from 3cm to 10cm in a few hours while they were saying it’d take hours…no! Let my body do what it’s supposed to do- of course I wasn’t completely opposed to a little push but I had to give my body and Oliver a chance.

I didn’t expect towards the end of my pregnancy to get this urge of readiness. This trust. This “let’s do this” attitude. I had done my homework by getting advice from women around me who had done it, read couple books and attended birthing class. I might put thoughts in boxes sometimes, but I do like to be educated and feel prepared. Although, some will say too much information is literally too much information which I have to agree with. At some point I felt like I knew enough so It was time to just appreciate the feeling of empowerment! That feeling was also not a coincidence as I was R-E-A-D-Y for my little pancake to come out!!! Phew! It’s funny how being pushed to certain extremes, how it changes your mindset: I was terrified at first of the thought of giving birth and then I was terrified at the thought of NOT giving birth! Tic toc buddy! Let’s go!

These two are like no joke! I think it’s amazing that we are more & more advancing in a world where meditation and visualizing is a thing. Honestly, nowadays, it’s what keeps me grounded. But most importantly, it’s an advice I kept receiving; to sit and visualize your perfect birth. To talk to your baby and say “we are going to do this together.” It took me a minute but when I’d take a bath, I would talk to Oliver and express my excitement, my love and worries. I cherished that we were a team!

PICK YOUR SOURCE OF INFOMATION

It’s very tempting to read about horror stories…they happen…things happen but there’s no need to lose yourself and your good vibes into thinking everything will go horribly because of what you read on Facebook and other platforms! This is something I didn’t follow enough and spooked myself more than once! Even now, I avoid reading horrifying stories about babies…like there’s a difference between being aware of certain risks and just pushed into being scared for life because of 1 on 1000000 chances for something to happen. I chose to stay on the positive side and faith. It’s not a fair existence to live in constant fear and boy do people love scaring the crap out of you!

These advices may seem super impersonal but that’s because birth is impersonal. Your birth story is unique. Components of your story are similar since the beginning of time but you can’t compare yourself. I felt guided but not as much as I wanted to, but no one can fill that blank…the unknown is that missing piece and acceptance is key. So these few things helped me tremendously to overcome fears I had about childbirth. If you want to read about my labor story, click here!

I hope that this helps!